Lately A Beautiful Mind comes to my attention often enough to signify its relationship within the grid of sacred geometrical aspects. After two viewings of the film, several pieces about John Forbes Nash, Jr. have appeared here at Blooming Rose Press in print and online.

His story has touched the hearts of so many to generate great admiration for his triumph over the grip of what must have been a hell-like realm of paranoid delusions and schizophrenia.

For the spiritual practitioner, the term "mind" surpasses the physical seat of emotional, intellectual and behavioral impulses – the brain. Medical and psychiatric practitioners address schizophrenia, for example, from the standpoint of genetics, molecular deficiencies, and dopamine imbalance, to name a few approaches. Great strides have been taken just since the time of 1959, when Nash indicates in his autobiography which appears on the Nobel site, http://www.nobel.se/index.html, that he experienced change from rational scientific thinking and began his shift into what he terms "dream-like delulsional hypotheses."

As we contemplate his astounding accomplishment of self-healing, questions arise having to do with the power of rational thinking, which appears to have, in Nash's case, led him back into scientific and personal productivity. It should be noted that this recovery is not, in his estimation, equvalent to a disabled person's return to good physical health. His joy in his present state (rather, his state at the time of writing his autobiography, 1994) is admittedly diminished because, in his words, "rationality of thought imposes a limit on a person's concept of his relation to the cosmos," and then he proceeds to refer to Zarathustra's apparent madness having distinguished the ancient Persian religious system of Zoroastrianism which continues to be recognized for its belief that the spirit of good ultimately prevails throughout the universe.

So, what is a beautiful mind? In Nash's case, is it one so acute that rationality itself was his tool for self-healing? In the case of 13-year-old Gregory Robert Smith – about to receive his bachelor's degree in mathematics, graduating cum laude from Randolph-Macon College – to me the astounding beauty of this brilliant young man's mind shines in his passion for non-violence and human rights; especially children's rights. With the rational function of Gregory's mind so astonishing that he solved math problems at 14 months, at the same time he is a luminary among prodigies with such highly developed compassion that he chose to eschew eating flesh at the age of two and began his mission of making a difference in the suffering of children when he was seven.

There are few heroes in my life. They number less than ten, and none are athletes or celebrities in the conventional sense, although some are well-known. Each of these heroes personifies a beautiful mind that transcends what’s commonly viewed as the complex functions of the human brain. They include Ani Pachen, the Tibetan warrior nun who survived 21 years of abuse and torture in Chinese prisons, all the while practicing compassion for her tormenters through her meditations, and who at 67 years old – with bandy legs and painful ankles and feet from long torture – led the 525 mile walk from San Francisco to the Los Angeles Chinese consulate in 2000, the March for Tibet Independence.

Another hero is also Tibetan – Tenzin Gyatso, His Holiness the 14th Dalai Lama. He is so much in the public eye that sometimes media distort his significance. It is well to take note that actor Richard Gere, who is a serious dharma student and a great Buddhist scholar with an in-depth knowledge of Buddhist culture, has dedicated himself to collect and archive all material generated by and pertaining to His Holiness with Initiatives Foundation for the Central Archive of his Holiness the Dalai Lama (www.gerefoundation.org). His Holiness is a hero to me as a role model for non-violence in every aspect of existence. His life – a seemingly endless path of heartbreak, separation, travail – is the practice of a monk who sees every moment in the light of optimism. Recently I saw a van belonging to Tibetan Buddhist practitioners with Tibetan prayers professionally painted on its hood and a sign along the side. I drew closer and read, “’My religion is…kindness to all.’ His Holiness the 14th Dalai Lama.”

Number one on my list of heroes was born in the grove of Lumbini in a region known as Kapilavatthu, located in the Himalayan foothills of present-day Nepal. His family name was Gautama, his given name Siddhartha.

Siddhartha Gautama’s story is well-known. He became called Shakyamuni – Silent Sage of the Shakyas – during his wanderings as an ascetic, for he was son of a Shakya king. After numerous efforts by his father to shield him from everything having to do with the world outside the palace gates, Siddhartha embarked upon a path of renunciation, contemplation, and supreme realization with the result that he practiced for some 45 years thereafter what he had come to realize, and taught those who were drawn to him the Four Noble Truths, based upon the experience of enlightenment. Siddhartha became known as Shakyamuni Buddha, which means “The Enlightened One of the Shakya Clan.”

This was a man in every sense, not a god. He experienced every sensation and emotion that we all do. He had family pressures, aches and pains, attachments and distractions, and along the way, many hardships. Even so, he came to be recognized as a Buddha, “awakened one,” one who has reached complete liberation from the cycle of existence. This came about through an extended calm, quiet sitting in meditation until all the stories, all domination of sensations and emotions, all distractions subsided. He entered into pure, undifferentiated union with All That Is.

What especially makes Shakyamuni Buddha my hero is this: although it is uncommon, he is not the only member of humankind to attain a permanently enlightened state of being; yet he is foremost among them because, out of compassion for the suffering of all sentient beings, he broke his silence at the repeated requests of others. Even though he knew the essence of enlightened existence could not be imparted through words or by other means, being moved by compassion, he began teaching them. They moved from place to place together, fed by those in the areas they traveled. His life as a human ended when he succumbed to symptoms brought on from eating spoiled food at around the age of eighty.

The teachings he left behind form the basis of a psychological framework within which we all have an opportunity to receive the tastes of enlightenment that provide potential for complete liberation.

What a beautiful mind! 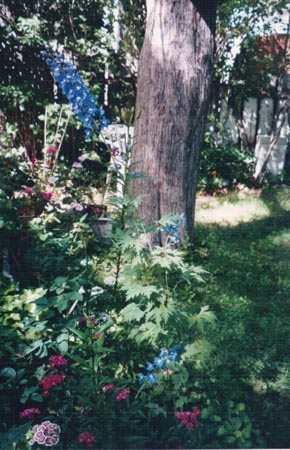